How to Use Reracks to Crush Your Competition

Ah, the Beer Pong Reracks Rule. All official beer pong rules include info about reracks. The “rack” in beer pong is the beer pong cup formations (positions of the cups on the table.) 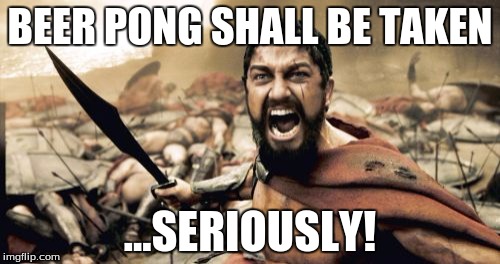 Get ready for an all-inclusive list with pictures, video, descriptions, and beer pong tips for the various beer pong cup formations. 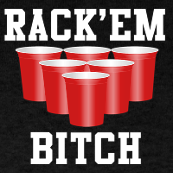 Important note: Official beer pong rules state that you can’t ask for a re-rack if you’re “dialed in” and hit two cups in a row.

The Centered Re-Rack cup formation doesn’t really count as a re-rack. This is because you’re only moving the beer pong cup back into the original position, had it not slid or been knocked out of position the round before.

The Triangle Beer Pong Rerack cup formation refers to moving the cups close together in (duh) a triangle shape. This is the most common of the 3 cup beer pong reracks rule.

More and more people are starting to use the Play Button Beer Pong Rerack cup formation as part of their official beer pong reracks rule tradition.

Experienced teammates frequently use the Stop Light re-rack to sink a few cups in a row. In fact, smart beer pong players use this cup formation all the time as their secret weapon.

I know, I know, this rack doesn’t look like it would be helpful. But some beer pong players actually like it so that they can accurately call out cups. (If cup-calling house rules are being played. See our beer pong house rules for more on this.)

This variation is the same as the Triangle beer pong cup rerack formation, except for the triangle is reversed.

And along we move to the 4 cup formations! The first one is a favorite of mine and has two names.

The 4 cups in a square like this is a huge advantage. No matter which cup you eliminate, the three remaining cups will always stay touching. That means no satellite cups to distract your shot.

Much like the previous formation, this re-rack gets rid of any pesky satellite cups.

Tip: To really boost your chances of landing cups, shoot at side angles, creating nice straight lines. See our beer pong tips section for more on this. 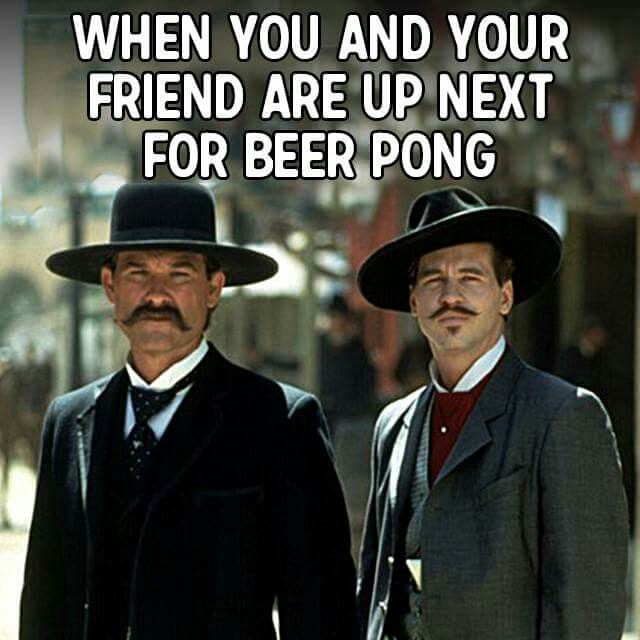 This is another great technique for players who’re better at making distance shots.

The harpoon, or flag beer pong re-rack takes advantage of a linear layout.

Beer pong players have never agreed on the right cup that forms the flag or harpoon shape. Is it dumb and only there for the sake of making a flag shape, or is it valuable?

Is it just me, or is “Mini Zipper” a sweet name for a formation? Regardless, this rhomboidal shape is actually quite basic, just like the Diamond or Square layouts.

Tip: If you need a basic layout that’s a perfect all-around, you can’t go wrong with the Mini Zipper, Diamond, or Square formation.

While this is a risky re-rack formation, it’s fun to use when you’re in the zone. It also gives you more of a challenge, for two main reasons:

Yeah, it’s trickier. But don’t get stuck in the boring habit of choosing the safe beer pong re-rack cup formations every time.

(It’s not the kind of re-rack you want to request when you just made out with a random person who for some reason is wearing a toga and a “Happy Saint Patrick’s Day” hat. And you also don’t know where your shoelaces went. My college days party days really did provide me with valuable information for my blogging career.)

Like the other linear re-racks, this formation is perfect for players with good depth perception, as well as a team who’s on a winning streak that night.

In case you don’t already know, this formation is also known by the name of everybody’s favorite male body part. Just look at it. See what I mean? Well, 2-1-1 is a great code for when kids (or prudes) are around.

Beer pong players prefer this 4 cup rerack variation because it plays on that great straight line shooting element. It also provides a wider area in the back for cups that are more distant and probably a bit more difficult.

This re-rack is just a larger version of the “2-1-1” cup formation. The added distance makes this beer pong rerack cup formation even more challenging than the “2-1-1.”

However, it still gives you more of a chance for distance shooting accurately. It also allows you to discover whether the age-old “bigger is better” saying is true or not.

The tips for the 2-1-1 XL beer pong rerack cup formation are exactly the same as the regular 2-1-1:

Okay, so you’re obviously trying to make a comeback if you’re asking for a re-rack with 5 cups left. As with other straight line formations, this layout helps you get into your rhythm and zone out your noisy friends. Like the 2-1-1 variations, this layout increases your ability to continue to sink cups, even when you’re shooting at a distant target.

Above all else, this is the best nerdtastic formation out of all the various beer pong re-rack cup formations. Wizard Staff? Yeah. You gotta give it credit for that.

You can tell that your opponent is a pro if they ask for this re-rack. They know that if there are two straight lines, their chances are better and that they can show off when they sink that final cup in back.

Like the Kidney, this formation creates two easy line shot groupings with one cup in the back. Lock in with two straight lines and then show off with that final cup. Or, you can really show off by starting with that cup further back. Just don’t miss. Chances are that if you are asking for a re-rack with 5 cups still standing, you can’t afford to miss a shot.

This 5 cup beer pong re-rack is flexible and perfect for both beginners and advanced players alike. For beginners, it’s wide enough to accommodate those who can’t aim horizontally. Pro players can also have fun with this one, using the Trapezoid set-up to shoot from several angles.

At first, the Crosshairs beer pong rerack cup formation looks like it’s a “novelty layout.” But it’s actually a great strategy for players who tend to shoot the same cup over and over. Players can aim normally with a small change in direction up, down, left, or right.

Remember the Reverse House cup formation? As you can see, the House beer pong re-rack cup formation is almost exactly like it, as there are two lines with one single cup on the end. Except for this time, the loner cup is closer to you.

Of course, there’s also the benefit of a 4 square cluster.

First up in the list of 6 cup formations is the Shield re-rack. It’s similar to the Diamond formation but creates two nice clean straight lines. (Which I find to be easier.)

Similar to the “side trapezoid” 5 cup rerack, the Zipper beer pong re-rack places the cups as close to each other as possible, while still keeping 2 straight lines. The angled side placement of the cups creates a padded area for those players who aren’t great at aiming horizontally.

A basic re-rack, this set-up places the cups in close proximity and a familiar layout for less stress.

I’m not sure why there are so many names for this. But for whatever reason, there are four different ways of referring to this pyramid-like set-up. Obviously, one is the Pyramid beer pong re-rack cup formation.

The other three are:

There are two other names for this formation, which are:

This well-organized layout puts the cups in a super easy to hit formation. 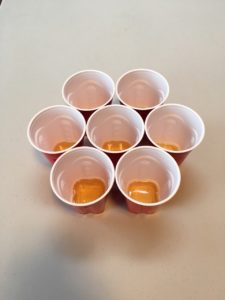 For those of you with good depth perception, the Marching With Leader re-rack cup formation is excellent. You have the advantage of distance that fits you so well as well as fairly easy to land side-to-side cups.

The name speaks for itself with the familiar triangle layout plus a single cup lined up straight in the front. Perfect for newbies and expert players alike.

This formation makes me think of a Honeycomb/Triangle hybrid. And obviously based on the name, it looks like a Christmas tree.

If you’re asking for a re-rack at 8 cups, you’re probably facing a huge domination by your opposing team. You need a re-rack that will allow you to win quick as hell. To make things easy, ask for the Marching cup formation.

The two rows of four create an easy grouping. Dial it in and forget the world around you. Focus, or you’ll be wasted in no time.

All diamond formations have the benefit of keeping cups close together. This one is different in that, with 9 cups, there is no way to avoid satellite cups without asking for a re-rack four cups later. Sorry, guys. If you’re asking for a re-rack at 9 cups, you might be out of luck.

If you live under a rock and still don’t know how to set up a Full Rack, here it is! Create a triangle from your cups with four rows, each increasing in number from one to four. See below for a better illustration.
Back to Overview

Why Good Beer Pong Equipment is Crucial to Success

Before diving into beer pong cup formations, I want to make sure you have the best beer pong equipment. You’ll need:

If you’re hosting, it’s so important to have this stuff ready to go.

Since there are plenty of bargain beer pong sets and equipment available, you don’t have to spend an arm and a leg to get the supplies you need.

You Got It, Champ!

There are a whopping 34 different beer pong reracks rule cup formations on this list. But we’re always looking to add new ones!

The reason you should make house rules known is that not everyone agrees on those rules.
Make sure everyone’s aware of the house rules before the game starts. That will prevent drunken arguments later on in the night!

Watch the “Beer Pong ReRacks Rule Video”
If you’re a player on someone else’s turf, double check how many reracks they allow. Then set a strategy for that particular set of house rules.
Back to Overview
Know house rules. Because of games like this!

Watch the Video How to Play Beer Pong ReRacks Rule

Important note: These Beer Pong Reracks rule pictures have been taken from the perspective of  you standing on the opposite side of the beer pong table and aiming to hit your opponents cups.

If you’re looking for more beer pong rules, check out our Official Beer Pong House Rules List where we covered 24 beer pong rules in-depth so you can add them to your house rules.

This video isn’t at all comprehensive, but it’s a start: