What are Beer Koozies made of?

Beer Chuggie's, Beer Coolie's, Beer Pong, Uncategorized
Fire
The Wheel
The Automobile
The Beer Koozie
All very important discoveries made by humanity.
Beer Koozies are exceptionally important because NO ONE likes a warm beer. Imagine, you’re in the sun all day. You start breaking a sweat. What would be the most refreshing thing right now? An ice cold beer, of course!
You grab your bottle.
Take a gulp.
YUCK
That warmer-than-room-temperature beverage just ruined your day.
That is… Until the Beer Koozie came along.
This magical device has helped keep beers cool for decades now. But what are these magical creations made of? Why do they even exist?
A quick description of how a Beer Koozie works:
Think of your home. You need a layer of insulation to keep the outdoor elements out and keep the internal temperature where you want it. A Beer Koozie functions the same way!
The magical part of the Beer Koozie is that the material is light weight enough to be easily carried around for an afternoon but also act as an insulator.

So, what are Beer Koozies made of?

The answer is Neoprene.
Neoprene is a synthetic rubber-like compound.
Neoprene is perfect for a Beer Koozie because it is not only lightweight but also resistant to heat. In fact, Neoprene is also used in Scuba Suits to keep you warm when you dive!
Easy to see why Neoprene was the solution to this problem!
We at Chuggie are champions in beer comfort innovation.
That’s why we created the Beer Koozie that holds your cigarettes and lighter.
Now you no longer have to worry about losing your cigarettes, lighter, or keys while you party!
If you want to check out the Chuggie, you can click here.

Yeah, you read right… We have compiled the coolest beer koozies out there just for you: 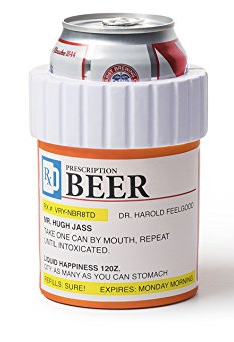 Follow the doctor’s instructions and drink your beer! This beer koozie will fit regular cans and bottles, the inside is lined with foam. You can buy it here.

Beer Koozies with Pockets for your Cigarettes, Lighter and Phone:

We may be biased here as we are the manufacturers of these beer koozies. But we truly believe it is one of the best coolies out there.

Why? The material is 3mm Neoprene (not cheap foam) so the cold will be locked in longer. Additionally, who doesn’t want to store everything important in one place: beer, cigarettes, lighter, phone and more things that you can imagine. In case you are wondering, we have for both can and bottle. 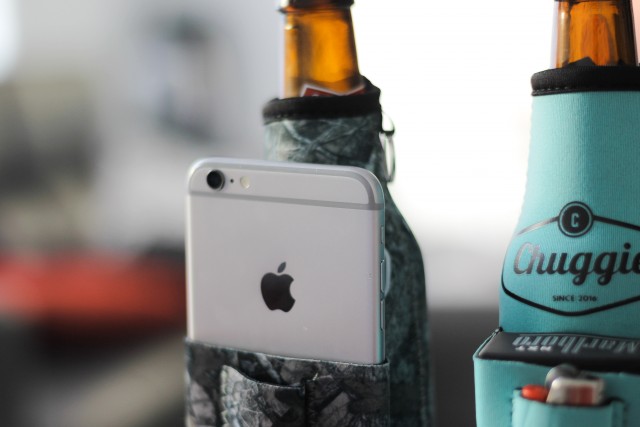 Do you feel like boozing in the shower? So we thought. This beer koozie easily sticks in the wall of the shower and holds your beer, it won’t keep it colder but it is a little sacrifice to bring your beer with you all the time. 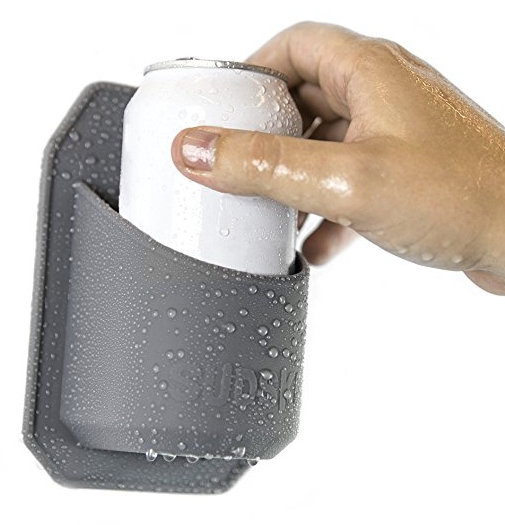 Sneaking in beer somewhere? We got you. This collapsible coffee cup holds regular cans and when not in use it can be stored or carried easily. You can buy it here. 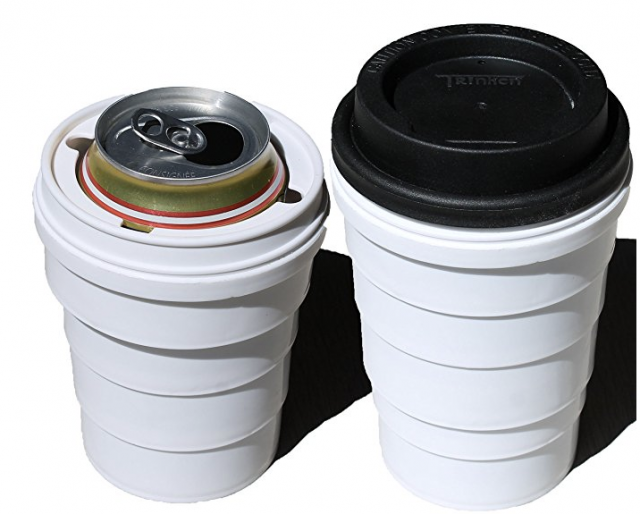 So what is your favorite? You need to be ready for summer!

A beer growler is a glass, ceramic, or stainless steel jug used to transport draft beer. They are commonly sold at breweries and brewpubs as a means to sell take-out craft beer. Rarely, beers are bottled in growlers for retail sale.

This is the most popular type of growler, and the cheapest one. Our top choice is the 2 Liter Amber Growler with metal handle. We do recommend an amber growler as it will prevent damage to your beer from UV rays or sun exposure.

The see-through characteristic of glass growlers makes the process of filling easier and you can always see how much you have left when you drink, plus our best choice has a convenient handle. However, you should take into account that these are fragile compared to the next type of growlers.

Stainless Steel growlers will keep your beer colder for longer periods of time and will endure adverse circumstances such as drops, sun, UV rays, temperature, among others. If you are planning to get a growler for camping, hiking, hunting, or out for a party our choice

is the Stanley Vacuum Insulated Growler. This growler maintains beer cold for 24 hours!

If you are a beer pro and would like a Stainless Steel Growler that will keep your beer carbonated for 2 weeks, with variable pressure regulation, and easy dispensing definitively you should go with the uKeg 64 Pressurized Growler. It is worth the money if you are serious about your craft beer and should last a lifetime!

Ceramic growlers are more difficult to find, and therefore more expensive than a regular growler. Additionally, they tend to be heavier and prone to break, if you decide to go for a ceramic growler bear in mind that it will be harder to clean and carry around. On the other hand, you will have a piece of art in your hands if you get the Ceramic Stoneware Weatherworn Cannonball Beer Growler – 64 oz.

Not ready for brewing your own beer yet? Check out our beer coolies for cans or bottles. Both available on Amazon.com and Amazon.ca.

How To Play Beer Darts The Drinking Game With Rules

How To Play Beer Darts The Drinking Game With Rules

This is an awesome summer drinking game that is guaranteed to get you nice and sloshed. Especially while you’re camping. With a hilarious training video, pictures, and GIFs, I’m going to unleash your inner Beer Darts beast. Grab yourself a drink, relax, and I’ll take care of the rest.

Here are the 9 essentials:

How To Play Beer Darts The Drinking Game With Rules: Set Up

It’s helpful to make sure you’ve found an open space where darts will easily stick into the ground. Usually, grassy areas are the best places to play.

#1. Once you have an open area set up, place the camp chairs about 10-20 feet apart from each other.

#2. Next, put the rubber mats on the ground right in front of each chair and lean the cardboard up against the chair. (This will block the dart from flying through the chair or into your legs.)

And wallah, set up is complete. You’ll get a better idea when you see the videos.

How To Play Beer Darts The Drinking Game With Rules:
Step-by-Step Instructions

First and foremost, the object of beer darts is to throw a dart into your opponents unopened can of beer.

#1. Flip a coin to decide who goes first.

#2. During each turn, players have one chance to shoot at their opponents’ beer can.

#3. If the player pierces the can, their opponent(s) must shotgun that beer BEFORE the other team can throw.

#4. But if the player misses, it becomes the other team’s turn. You can play to however many points you want, but 3 or 5 usually works best.

#5. The winner gets to make any player(s) take a shot of hard liquor.

How To Play Beer Darts The Drinking Game With Rules:
Gameplay Variations

Stack ’em Up!- When a player throws a dart that hits a can, but does not pierce it, the opposing player must stack another full beer on top of their beer. The player must also take a shot of liquor when their can gets nicked.

To play, place a water noodle in a circle around your can of beer. If your opponent hits the noodle, they get 1 point. If the dart lands on the inside of the noodle, it is worth two points.

When the dart pierces the can, it is worth 3 points, and that player must shotgun that beer. This is basically horseshoes with darts!

Instead of playing in a backyard or a festival field, people have been making mats to play on. In fact, there are seemingly endless cool ideas for beer dart mats!

Play in a big group! Sit in a big circle and have 3 or 4 darts in play. You can’t throw your dart at the person directly on either side of you.

Other than that, same rules apply. Go until one person has 5 points.

Here’s the best video I’ve ever seen regarding Beer Darts!

I’m here to make sure your “Relax and Day Drink” plans aren’t ruined by rain. In the event that it’s raining cats and dogs, here are some backup drinking games to play indoors.

#1. The easiest on-the-fly indoor drinking game is the Most Likely Drinking Game. Since it doesn’t require any equipment, you can play this hilarious game anywhere.

#2. Another fantastic drinking game is Moose the Drinking Game. It only requires an ice cube tray and coins, so it’s easy to throw together last minute.

>>Learn How To Play Moose The Drinking Game With Rules<<

Obviously, drunks throwing sharp darts is kind of a stupid idea. (Stupid in the best sense, of course.) Here are my 4 safety suggestions.

#1. You should sit about 4 feet to the side of your beer to be safe and avoid getting hit with the dart.

#2. Another suggestion is to wait until you’re sure nobody’s throwing before going to pick up a dart.

#3. Keep an eye out for space cadets who might be so out of it they wander into the middle of the game.

How To Play Beer Darts The Drinking Games With Rules:
Good luck!

Congratulations! If you made it this far, it means you’re ready to go play a mean game of Beer Darts. Always drink responsibly, and have fun!


Love beer? This video’s for you.