The Civil War Beer Pong Drinking Game is quite similar to regulation beer pong, although the rules are slightly different. It’s a rapid-fire style game, hence the name “Civil War.” After flying through our entire Official Beer Pong House Rules List, we know you’re ready for one more Beer Pong Game. Let’s get to it, shall we?

Another key difference is the number of placers. Whereas Regulation Beer Pong limits players to a maximum of 2 on each side, the Civil War Beer Pong Drinking Game calls for 3 players on each team.

Here are a few key points:

The common rule of thumb when playing with a different amount of players is to play the game with at least half as many beer pong balls as there are players playing.

Hang onto your hats ladies and gents – remember Dodge Ball in elementary school gym class? We hope to god you don’t. Whoever invented unleashing wild hooligans to throw softball sized balls at each other was truly a sadist.

However, if you do remember Dodge Ball, you’re prepared to play Civil War Beer Pong Drinking Game like a pro. 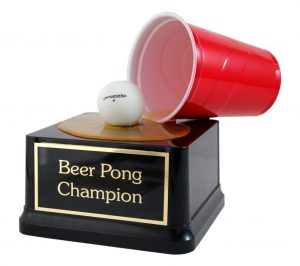 Here’s how it goes down:

On the other hand, it moves much more quickly because nobody takes turns. Essentially, it’s a chaotic bunch of sugar high 8 year olds fighting over fallen candy from a pinata.

One of the flames fueling the chaos is that the table area is neutral. Unlike regular beer pong, anyone from either side can go after balls left in any number of places: anywhere on top of or below the table, or in the wash cups.

Unless the ball is in a player’s hand, the ball is vulnerable to attack by a pack of bloodthirsty hyenas.

Now that basic game play is out of the way, here are some key rules involved in the Civil War Beer Pong Drinking Game:

Just like in beer pong, when your opponent hits your cup, you must finish its contents before resuming throwing ping pong balls like the hooligan you are. The drink-before-you-throw rule is always in effect while playing the Civil War Beer Pong Drinking Game.

Another similarity to traditional beer pong is that the Beer Pong Death Cup Rule is in play and it’s as crucial as ever to grab your cup as soon as it’s hit.

It’s important to realize that the Sniper Rule is not in effect, at least not in Chuggie’s official rules.

In the event that your opponents nail you twice before you finish, you can redeem yourself by hitting two cups in their rack if it’s on the same turn. As in, “same turn” meaning they haven’t finished the contents of the cup you previously hit and they’ve put the empty cup on the table.

If this happens, it’s Balls Back time, baby. Your opponents must roll that ball back to you.

Once all of the cups in your rack have been hit, you’re out and that’s final.

Sorry, Charlie. There is no Redemption or Overtime in Civil War Beer Pong Drinking Game.

In the unlikely event that each team hits the other team’s last cups at the same time, the team that threw the first ball to hit the cup reigns victorious.

(Just like the Elbow Rule, this tie breaker is extremely hard to measure and both sides will think they’re right. Anyone feel like a good old fashioned fight?)

Last of all, we want to dish out a diabolical strategy.

When playing the Civil War Beer Pong Drinking Game, all 3 players can gang up to aim at one opposing team member’s cup. If they’re able to sink two balls into that same cup, the player is eliminated and must chug all the remaining cups on the beer pong table.

Now that we’ve told you our take on the Civil War Beer Pong Drinking Game, what are your thoughts? Do you play with any different variations?

*If you’re that worried about germs or grit in you teeth while playing, put on your big girl panties and get out of your head.
Back to Top of Page