Start that dirty sailor talk while you learn How To Play Fuck You The Drinking Game With Rules and Tips.  This drinking game (also known as the Pyramid Drinking Game) encourages you to swear up a storm!

Overview of How To Play Fuck You The Drinking Game

How To Play Fuck You The Drinking Game:
What are “Matches”?

In “Fuck You The Drinking Game,“ matches are cards with the same number.

For example, a two of hearts and a two of spades are a match.

4 Easy Steps to Set Up

After Yelling “Fuck You, Russ!”
Start Counting Down from 3

This cycle keeps going until every card in the pyramid has been flipped. Obviously, the player with the most leftover cards at the end loses.

Note: If nobody has a match, everyone drinks.

Skip Down to Fuck You Video

The rules listed above are perfect for an easy drinking game. Once you’ve mastered the basics, here are detailed alternate versions of how to play fuck you the drinking game, all sharing one common factor: “Fuck you!”

#1. “Fuck You, Your Majesty”
How To Play Fuck You The Drinking Game Gameplay Variation #1

What happens when they guess wrong: If this happens, they have to drink as many drinks as the number is on the card.

Different rules apply to face cards: If a player guesses wrong, they have to drink for three counts.

Note: The player can say “Fuck You” and give all the drinks to one person.

#2. “Revenge Fuck”
How To Play Fuck You The Drinking Game Gameplay Variation #2

The player with the most leftovers is the ultimate loser and has to take their punishment like a champ.

The only similarities in this variation is that the word “fuck” is present in the rules and it’s a drinking card game.

Beer works best for this one and you should have a beer mug to place in the center of the table. In King’s Cup, cards have special meaning that dictates which players will need to drink:

Two: “Fuck You” – The person who flips the two gives out a drink to another player.

Three: “Fuck Me” – The person who flips has to drink.

Four: “Floor” – The last player to put their hand on the floor has to drink.

Five: “Guys” – All the males in the room get to drink.

Six: “Chicks” – All the ladies in the room get a chance to throw back a shot.

Seven: “Heaven” – The last player to lift their drink in the air has to drink.

Nine: “Bust-a-Rhyme” – The person who flips the card gets to make up any sentence. The next player then has five seconds to come up with a sentence that ends in a rhyme with the first one. The player who can’t think of a rhyme drinks. 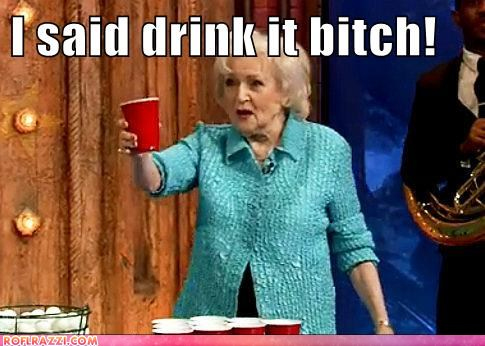 The sentences can be about anything. For example, “Pickles jump when marshmallows fly.” The first player to incorrectly repeat the sentence or take more than five seconds to come up with a new word needs to take a drink.

Face Cards
for King’s Cup The Drinking Game With Rules

Jack: “Categories” – This lucky player’s job is to decide upon a category and then have players name appropriate things within the category, within the five second time limit.

(An example category is “Romantic Comedies”, so players can name movies like “Runaway Bride” and “The Holiday” The first player who can’t come up with anything drinks.)

Ace: “Make a Rule” – Aces give the player the power to make up a rule that has to be followed for the rest of the game, with the penalty of a drink for any disobedient players. For example, “No saying the word ‘me’” is allowed.

So, ready to play Fuck You The Drinking Game?

Rest assured that whether you choose to go with the standard Fuck You, Revenge Fuck, or King’s Cup, you’ll never feel more satisfied after an uproarious night of blending two of the best ingredients ever: “fuck” and drinks.

Readers who read “How To Play Fuck You The Drinking Game” Also Liked:

Across the Bridge Drinking Game

How To Play Captain Dickhead, Fun Drinking Game With Rules

How To Play Uno The Drinking Game